When I said the vegan/keto thing is expensive, I really, really meant it. Since I only need to feed myself and my dog, Nefie, I budget $280 a month for groceries–$80 of which goes to dog food. I spent more than my month’s human grocery budget just on supplies for vegan fat bombs! Which meant I had to postpone the go-live date for the new diet until I could afford produce.

Because produce is also maddeningly expensive.

This gave me extra time to eat through the non-vegan items in my refrigerator and pantry. After a week of eating disastrously (ALL the cookies), I decided to take the last six days before payday—and the final items in my kitchen—and put my body back into ketosis.

This can take anywhere from two to seven days and a pretty close scrutiny of your macros. I inventoried what I had left:

I studied the nutrients of these items, wrote them all down, and formalized a plan. Admittedly, certain items on this list are not first-grabs for a ketosis goal, like peanut butter and hummus, but I knew I could make it work. All I needed was celery and paper cups (the kind you put cupcake batter in). After a quick run to the grocery store (costing, including gas, less than $10), I had everything I needed.
I broke the next six days into two separate meal plans: Tuna Day & Pork Day. I knew I could break up the pork into four servings of 100 grams and the tuna into two servings (technically, I could have stretched it to four, but I needed to double the servings of each can to get within range of my macros).
It looks like this:
Tuna Day

Tuna Day Macros, eaten between 10am and 8pm

Pork Day Macros, eaten between 10am and 8pm

So, cool, I’m getting within range of my macro goals, although really underperforming in the protein area. Normally, I would just eat more meat—but I’ve been bingeing food documentaries and one thing seems pretty common: As long as I eat food, I should get to Friday. It should be fine. This is fine.
In fact, as I am at the end of the second Tuna Day, I feel really full. Yesterday, I barely got through dinner. I had been afraid that I was overeating when I became lazy about scrutinizing my macros in the months leading up to this diet shift. However, I wonder now if I was undereating. I know for sure I wasn’t eating enough healthy fats. Those bombs sure do their job!

Oooh, speaking of which, this was the very first time I’d ever actual made a fat bomb! I always relied on cheese and avocado for fats, and never really dived into this part of the diet. Scandalous, I know. Perhaps I was afraid of sugar substitutes or how awful something would taste without a “real” sweetener.
Turns out, the vegan, white chocolate, coconut fudge fat bombs (what a mouthful!) were super fluffy and smooth and tasty. My presentation isn’t stellar, but I’m telling you, they were great. The original recipe is on Pinterest here: https://pinterest.com/pin/515873332310749764/?source_app=android I used 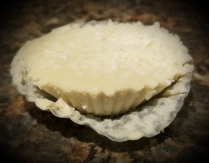 unflavored stevia and unflavored PlantFusion Complete Protein Powder, but otherwise followed the recipe.
If you try the fat bombs, I would love to know what you think! Have you ever mapped out your macros? What is your nutritional journey? I have a secret: